When I was seven, I was picked out to be the subject of a television documentary for World in Action called '7 Up.' I was happy as they also chose my girlfriend, Michelle Murphy, to be in it. They asked me a few questions, and filmed me, running about and swinging in the playground. It didn't really sink in till the day after the program aired on the telly, when some of the kids in the flats where we lived, and at school, told me they'd seen me on TV.

But how did the 7UP series begin? Click here to read How the up series came about 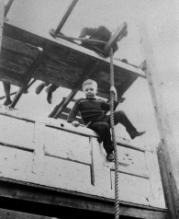