This past Sunday, we had our brunch with our favorite London Cabbie, Tony Walker (and his lovely wife, Debbie) at Swing 46. Tony is some raconteur, isn't he? Here's Tony (with NY Eastie Kevin) entertaining the troops (as it were) as we were, as always, hanging out in the front of Swing 46, waiting for everyone to get there. Tony got there early and greeted everyone as they arrived as if they were a long-lost friend. Over the course of the afternoon we were treated to recounts of some of his adventures (the ones that stand out were the ones about working with Steven Spielberg and driving gleaming George Hamilton - if I could type with a British accent, I'd write them up here, but I think they'd lose too much in the translation.) And by the way, if anyone ever runs into George Hamilton, ask him if he's ever had a cabbie in London named Tony, just to see his reaction! After listening to him, I think that everyone there could picture him in Albert Square, maybe a long-lost Mitchell or a Moon. It sure would be fun to see that happen. 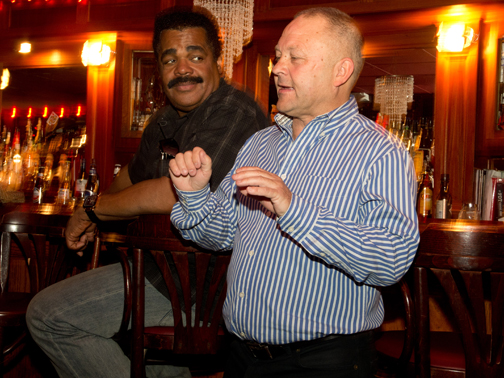 Originally, we were going to watch a clip special from the 7UP series, but when that didn't turn up, we watched a great special called Eastenders Sweethearts, that was all about the relationship between Sonia & Martin. **We will be re-running that special at the end of our next Screening Brunch (in June) when we also watch the Pat Tribute special Farewell Pat.

We cannot thank Tony & his Debbie enough for taking the time to spend an afternoon of his vacation in the Big Apple with us!

Letters to the Editor

What an absolute delight Tony Walker is! Everything I expected and more! So charming, and I loved his taxi stories. Thinking about his experiences..........jockey, film extra, taxi driver, actor................it's as if he has lived several lifetimes in one. Debbie, thank you so much for setting it up.

E20Launderette Says: Yes, he is a delight. And with all those adventures, he should write a book, shouldn't he?

You engineered quite a coup. The afternoon was great fun. Getting to know the irrepressible Tony a bit (and meeting his very pleasant wife) -- plus the Sonia and Martin highlights screening -- made for an unusually entertaining double feature.

All that, along with the news of our fundraising success, turned a rainy day sunny.

E20Launderette Says: Actually Brava to Tony & his Debbie for spending their afternoon with us!

The luncheon was great, he is really a character.

E20Launderette Says: He sure is!

It was lovely seeing Tony again and meeting his wife, Debbie, with whom I had a nice stairway conversation on the way to the loo. I really enjoyed the brunch.

What I forgot to mention- Tony was jumping subjects at breakneck speed - is that tomorrow, April 23, is St George's Day, in honor of the patron saint of England (of course there's Saints Paddy for Ireland, Andrew for Scotland, and David for Wales)

E20Launderette Says: Happy belated St. George's Day to all, and to all a good night!